Our blissful Guruji is Supreme. The Almighty had descended on earth in the form of our Beloved Guruji, not very long ago.He was even with us a few years back. He is the divine incarnate who showered his heavenly aura. He walks with his loving sangat hand in hand supporting each and everyone through their pain, pressure, sweat and tears. Blessed are many of us who had the opportunity to meet “The Lord Shiva”, “Our Guruji” in human form. Being the Lord Incarnate, Guruji drank most of the poison (hardships) of his devotees leaving them to deal with only a tiny part of it.This is our Guruji.

Guruji is Supreme Lord we cannot just define him by addressing him as Guruji only. He is the incandescent light that guides us through the dense path of life. The Darshan of Guruji mesmerizes devotees and calms their inner self. They forget all their hardships and hindrances and gain immense joy in his blissful presence. But we cannot meet him without his invite, no matter how much we try. When he invites you he will pull you towards him like a thread tied to your leg from wherever you may be.

Once we get connected to him his heavenly glance filters our inner soul, giving us a new purpose in life. We feel so connected to him and his presence everywhere we go. Guruji used to say “mango nahi manno” which translates to have faith in him always, he is always there for us, and we do not have to ask him for anything he knows our needs. Guruji also used to say “ Apne dimaag ko bahar chad ke aao jutti ke saath”, once you come to me, leave your own thoughts and ego outside with your shoes.

Guruji always wanted his devotees to be humble. “Kis gal da ahankar?” He never tolerates an ego and would always help us in different ways to come out of our ego and be humble. One should always learn to be selfless. Blessed are the ones who can overcome their egos.Guruji did not want any publicity or security for himself. A True Guru has enough power to protect himself and his devotees. “He invites those who are bound to meet him, when their time comes.” 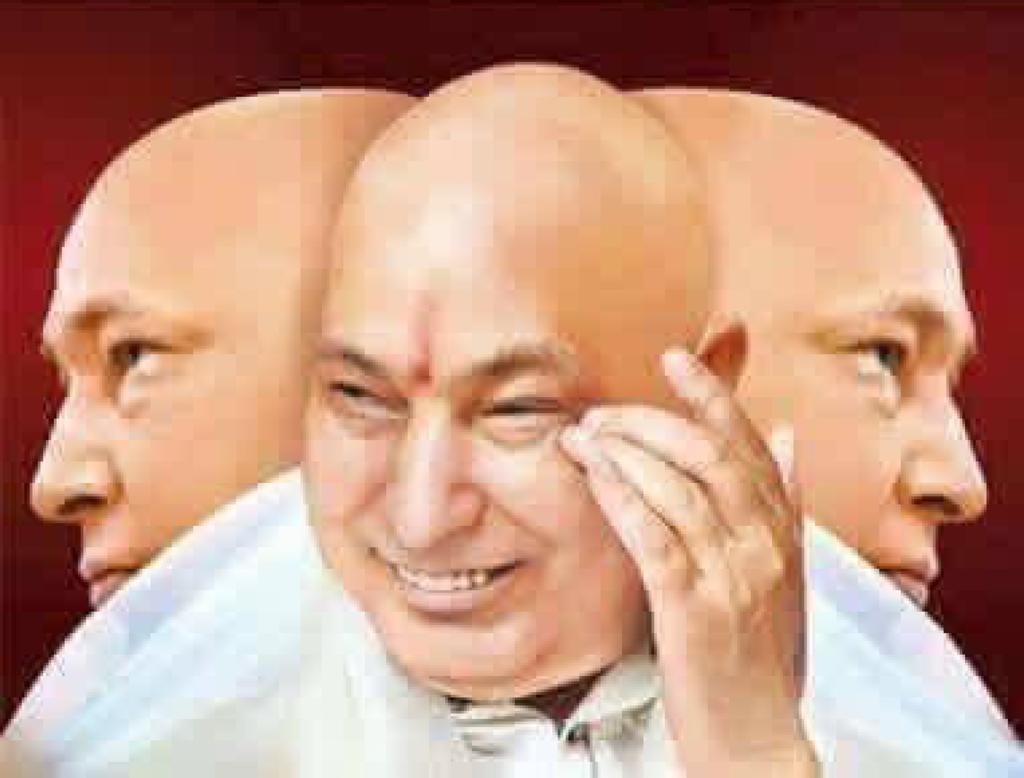 Guruji was born in Dugri Village, Malerkotla, Punjab,on the 7th of July 1952. His mother had no idea that Mahapurush was born to her. The midwife had stated that on the day Guruji was born, she had seen a snake and a strange bright light fill up the room. The Pandit who made Guruji's birth chart had predicted that he belonged to the entire world. Even as an infant, a rose fragrance used to come from his body and his clothes would also never get wet.

Guruji went to school at the Dugri primary school and Government High School. He did his college from the Government College at Malerkotla. Guruji was double M.A in English and Economics. He spoke fluent English and had beautiful hand writing. Yet, just to confuse us he would often ask us to spell certain words for him. Guruji sometimes helped his father in firming, and the crop harvested would be in large amounts compared to others. His friends recall stories of Guruji filling the ink in a pen just by touching it. His professors used to get shocked by his sudden disappearance and reappearance from the classrooms. He also knew all the questions of the tests beforehand as per his friend's version.

In his earlier days Guruji's urge for spiritual things was spending time at the Dera of Sant Sewa Dass Ji at Dugri. Santji was a saint of high order who had renounced worldly life and had a large following. Guruji would often go and sit at the Dera. His parents wanted him to concentrate more on studies than spending time with the sages. He would be locked in the room, and to their surprise they would find the door unlocked and Guruji sitting in the Dera. His parents gradually came to understand that their son is no ordinary man but God himself. His mother also started touching his feet and called him Guruji as he is now called by everyone. Guruji left his home in 1975 after college and worked at Punjab School Education Board in a clerical position in 1983. He said that at the age of eight he could control his desires and devoted time to meditation. In his spiritual journey he would often stay with his acquaintances for a few days and then he would move from there. Sometimes he would also disappear for a certain period.

Guruji’s father did not believe in his way of life, he thought that he was pretending to be godman. One day he woke up to a strange sound in the early morning hours in Jalandhar Temple. He saw Guruji walking into a room with a lion behind him. He got scared and called the caretaker, who told him that Guruji is meditating in that particular room. That day he believed that his son is no ordinary human being.

In his spiritual journey he would often stay with his acquaintances for a few days and then he would move from there. Sometimes he would also disappear for a certain period. Guruji’s father did not believe in his way of life, he thought that he was pretending to be godman. One day he woke up to a strange sound in the early morning hours in Jalandhar Temple. He saw Guruji walking into a room with a lion behind him. He got scared and called the caretaker, who told him that Guruji is meditating in that particular room. That day he believed that his son is no ordinary human being.

“Asi Shiv.” – I am Shiv, was all he said and smiled. Guruji was Lord Shiva on earth to rescue and support the human soul. He also divulged his actual form to many of his devotees. Guruji used to give out a fragrance from his body. The smell was like that of roses. Till today when Guruji is no longer in his physical form, still his devotees can smell the fragrance whenever Guruji wants them to feel his presence. Guruji blesses millions of people, his sangat and also people who are connected to his sangat, whether they have come to him or not. It is said that if someone passes through the premises of the Guruji Temple, they are also blessed. Such is Guruji’s divine Aura. Guruji knew everything about his devotees. He was omniscient, he would always shower his blessings on them whenever they needed it the most.

Many incurable diseases like cancer and many other death threats were averted by Guruji to save his Sangat. There are a lot of devotees who have shared these experiences. Guruji would assemble all his devotees around him and would listen to the mesmerizing Shabad and Gurbani. The devotees would experience this meditate in front of him. Half of their hardships would vanish just by hearing them and their mind would be at peace. The other half would be cured by Guruji’s timely blessings. He would bless them in his own way, healing them with his miraculous powers. Sometimes he would bless his devotees with something they did not even dream of, such is our father, our Guruji . The Divine Langar Prasad and Chai Prasad served, heals numerous life threatening diseases like Cancer, Heart Problems. and many others as well. It is said about Langar Prasad that if one eats it in a Temple in front of GuruJi,it is a blessing for sangat. It does not have that effect if it is taken home. His nectar-like words are for us to drink to our hearts content.Guruji is like a Banyan Tree who protects his devotees and calms their stressful minds.

Once we get connected Guruji will bless us and anyone in distress who is also connected to us. He gives us the strength to face our difficulties and win over them. Knowing always that Guruji is there for us. Keeping faith in him, one can even move mountains fearlessly. We even laugh at our worries knowing that Guruji will protect us. When Guruji is there nothing can be harmful for us. We should always keep him in mind, feel his presence and worship him from the core of our heart. His material body has left us, but he is God Incarnate walking with us in every step and always succumbing to our calls and prayers.
Mahapurush has no name and that is why we address him as Guruji. He has no separate entity. He is our beloved Guru. 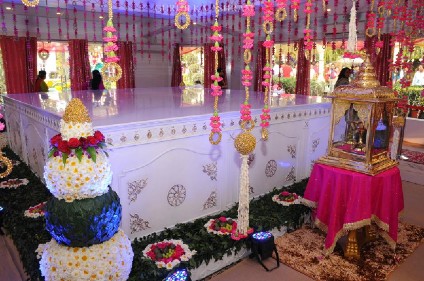 Guruji attained Mahasamadhi on 31st, May 2007. We know him as a body, all that is because of his Maya, which is very powerful to make us believe so. He had come on this earth to play the role of our Guruji. He is our Maha Shiv, who drinks poison to protect his devotees. He is Omnipotent, Omniscient, and Omnipresent. He has gifted us his nectar which are Shabads and Satsangs. We should drink it to our hearts content. Guruji will never leave us, he is always there welcoming us every day with faith and trust.

Hum ko mile hai aaj yeh ghadiyaan naseeb se.
I have been given today, this time, through / by destiny.

(Since god controls destiny; we are fortunate to have these few moments that god has granted us.)

Jee bhar ke dekh leejiye hum ko kareeb se.
To your hearts content see me (get to know me) closely.
(Implying they might never be together again.)